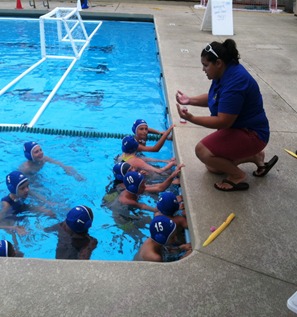 Water Polo: Played with American River for Eight Years and Participated in seven Junior Olympics. Played in the Speedo Cup Tournament and Participated in The Holiday Camp  at the olympic training center in Colorado Springs. Was a member of the Central California Zone team in 2007 and played in the Zone Team Championships in Kearns UT. Was a four year Varsity Player at Rio and won four section titles with the team, being named all metro and all city in my Senior Year. Received the coaches award and was a team captain my Senior Year. After graduating I received a scholarship to play water polo at CSUMB, but ultimately decided not to play. I began coaching in 2007 with ARWPC working with noodle, micro and youth kids. I was the assistant coach to the 10u team in 2009. I then moved to Southern California and coached with Huntington Beach Water Polo Club for two years before returning home.